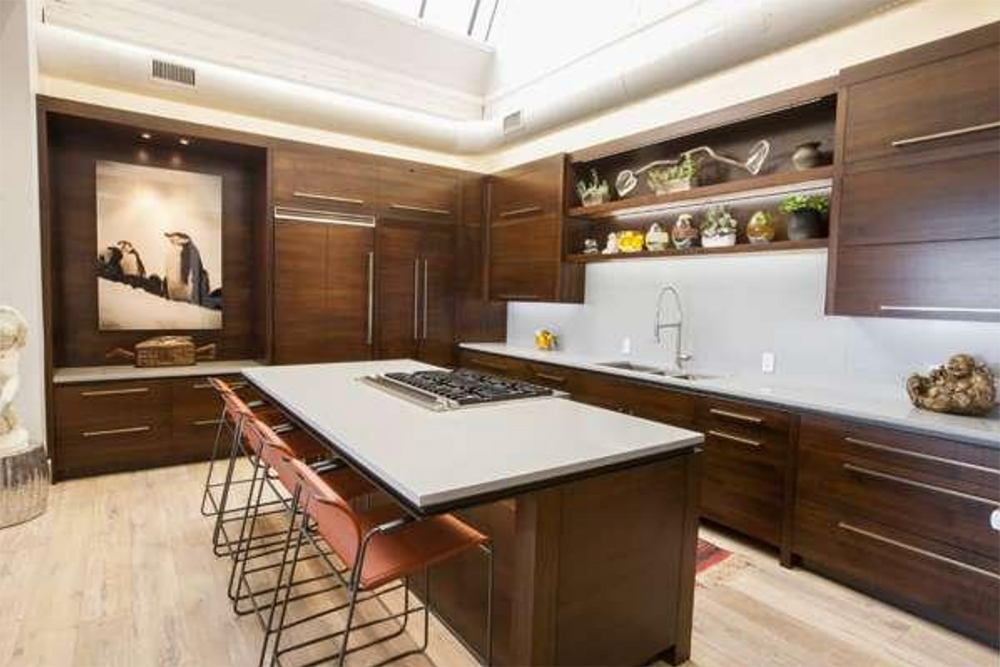 They’ve skied in Antarctica, scaled Kilimanjaro, climbed Denali. So it’s fitting that John and Elaine Del Monte’s latest adventure—the purchase of a loft in downtown Rochester—comes with a great view.

The three-bedroom space, one of 19 units in the Capron Street Lofts building, was an empty shell when the couple decided to make the move from the suburbs in August 2012, after nine months of designing the space.

“We are thrilled to move into the city,” says Elaine, who grew up in Louisiana and lived in several other cities before settling here 15 years ago. “The nicest people I’ve ever met are here in Rochester.” She says that John came with a vision for every detail, pointing to the exposed ductwork, painted brick and tall windows. The panoramic view through those windows includes the Frederick Douglass-Susan B. Anthony Bridge, a rushing Genesee River, Corn Hill Landing and the University of Rochester.

Still, that clean slate of an empty shell made Elaine nervous; she couldn’t visualize the end result. The couple worked closely with architect Tim Tyskiewicz, visual manager Jonathan Ragusa and Charles Arena of Arena’s Interiors in Rochester to create a look that would fit the contemporary vibe.

“It didn’t all come together for me until the floor and cabinets were in,” Elaine says. But she trusted John’s vision. After all, he is a builder and president of the E.J. Del Monte Corporation, which owns 17 properties—nine of which are here in the Rochester area (including the Del Monte Lodge and Spa in Pittsford and several Marriott hotels).

“John was involved right down to the wattage of the light bulbs, the direction of the lights and what we’d make the window ledges out of,” Ragusa says. “He chose the fireplace box to fit the code. He poured himself into the project. Every nuance was thought of.”

The nature of the loft made for some difficult decisions. “This was a large space with beautiful beams,” Ragusa says. “We thought they looked beautiful in their unpainted look, but it didn’t match the aesthetic we wanted.” So they decided to paint them—along with the ceiling, brick and trim—in a high-gloss gray that appears almost white. The walls are the same gray, but in a flat finish. Painting the trim in the same color instead of a contrasting one (often white against a darker contrast color) creates a contemporary feel.

“You need to respect the origin of the home, and you can’t make the interior space feel foreign to what the home is,” Ragusa explains.

That called for contemporary furnishings, too—a mix of vintage and new, some of which the Del Montes had custom made by local artisans. Their overall plan was to source local products and services as much as they could. Mike Souers, who works out of Scottsville, built the dark wood kitchen cabinets; Leonard Urso, whose studio is in Rochester, made paintings that hang on the walls; Rochester glass artist Elizabeth Lyons created the sculpture tucked in one corner.

The couple chose an engineered wood floor and a manmade Silestone countertop. “Granite would have been too busy and traditional for the space,” says Ragusa. “Manmade products are equally as durable and [with the countertop] you can cut the pieces any size you want and don’t have to worry about the seam. We wanted clean, stark and at the same time warm.”

Cabinet pulls, from Rocky Mountain Hardware (based in Colorado) are hand-cast and pitted and have a substantial feel to them. “They’re nice to juxtapose against a clean, contemporary kitchen,” Ragusa notes. The Del Montes are honorary chairs for the Boys and Girls Club, are very involved with the Rochester City Ballet and sit on the medical board at Strong Hospital, and they love to entertain and hold charity events in their loft. Recently they held an open house for Bivona Child Advocacy Center.

But before their vision could be realized, it took another creative eye to transform the building itself. The Capron Street Lofts are the brainchild of Patrick Dutton, a former Rochester Knighthawks and Rattlers lacrosse player who had worked in equities and investing in New York City and Chicago and also gotten involved in real estate.

Dutton had seen loft spaces in other cities and wanted to return to Rochester but couldn’t find the kind of home he wanted to live in. Then he discovered the Capron building, constructed around 1900 as a cold storage warehouse along the canal. It had undergone various incarnations, housing a furniture manufacturer, jewelry exchange and printing company. Dutton partnered with Belmont Properties to develop the lofts—which opened for residents in early 2011—and Nikko restaurant, which anchors the first floor. Dutton has other conversion projects in the works, as well, such as the Searle Building on St. Paul Street. “I hope to have a big impact on downtown,” he says.

The Del Montes, too, are excited about the growth downtown and their role in it. As empty-nesters, their vision includes a turnkey lifestyle so they can continue their adventures.

They own a home in Jackson Hole, Wyoming, where they ski. They also love to hike, climb and camp. In their new kitchen hangs a large photo taken on one of their Antarctica trips by a fellow traveler, photographer Keoki Flagg: a regal penguin marching across the snow. It’s one of the first things a visitor sees when entering the loft, and it’s Elaine’s favorite piece. She says it reminds them that one reason they moved here is so they could do the things that feed their souls.

“The bucket list is huge,” she explains. John is already planning a trip to Iceland in May. In the meantime, they’ve got their good view right here in Rochester.