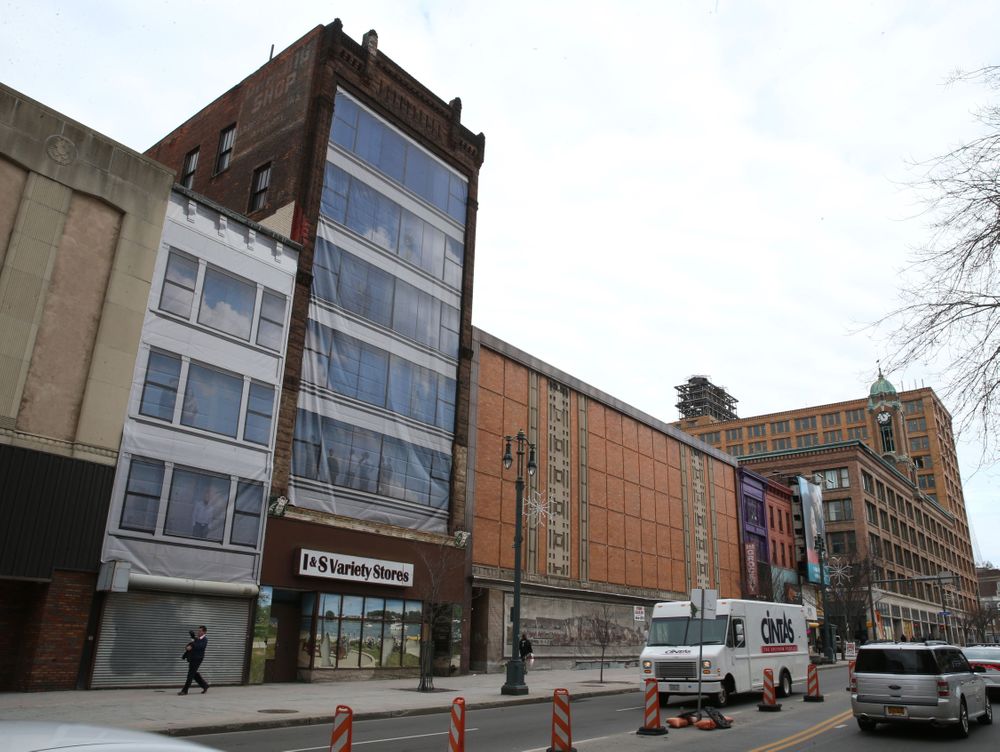 Massive banners — one measuring four stories in height — are tethered to the front of two derelict downtown buildings, located mid-block on a stretch of East Main Street that has seemed resistant to change.

The life-like prints depict how each might appear once renovated, showing office workers milling behind windows that reflect cloud-dotted skies.

Reality remains some time off. So developer Patrick Dutton, who owns the buildings between St. Paul and North Clinton with his uncle, Gary Dutton, and cousin, Luke Dutton, put up banners. Something of a gesture, they said, at a cost of $10,000, to other developers investing millions to revive buildings across the street, and to the city as a whole.

“We were tired,” Dutton said, “and others were tired of looking at these buildings and wondering what’s to come.”

While reality remains some time off for these properties, change is coming. To the east, work has begun on the bricked-over former McCrory’s department store. The top floors at 200 E. Main St. already are leased for government offices to include the Social Security Administration, relocating later this year from Five Star Bank Plaza. The agency will bring 47 employees and 200 daily visitors — with the full governmental space expected to accommodate double both numbers. The lease is for 10 years, at $32.63 per square foot for 17,000 rentable square feet.

“This is a game-changer for the block,” said Chris Hill, principal with Geddes Rochester, which owns the McCrory’s building. “This starts to bring this area that has been in question for so long, back to life.”

To the west, CGI Communications is expanding, and founder Bob Bartosiewicz plans for a muscle car museum to open in May. And, around the corner on St. Paul Street, the Dutton team and Gallina Development recently closed on the Edwards Building, planning a $21 million residential, office and retail conversion of the seven-story building.

These properties were left for naught after Renaissance Square, one of the area’s most ambitious redevelopment projects, collapsed in 2009.

“We are picking up the leftover pieces,” Dutton said of the plan that would have redeveloped the block for a performing arts center, Monroe Community College campus and bus terminal.

The other side of Main is a model of redevelopment, with every property under redevelopment or completed, including the Hyatt Regency Rochester, Hilton Garden Inn, Lincoln Alliance and The Metropolitan (formerly Chase Tower, and another Dutton/Gallina redevelopment). Dutton/Gallina bought the historic 1908 structure at 34 St. Paul from Monroe County for $550,000. There is no timetable for construction, but Dutton said the Edwards project would get underway before workers dig into those two East Main Street properties.

The Landmark Society of Western New York included the north side of the block in its 2015 Five to Revive, an annual listing that highlights buildings or areas in need of attention. Surviving buildings date back 150 years and, taken together, form the nucleus of a new state and national historic district that officials hope will aid in the block’s redevelopment.

The district has received state approval, but will get a second look this month after a minor revision. Sign off from the National Parks Service should quickly follow, said Larry Francer, associate director of preservation for the Landmark Society of Western New York. The designation is honorary, free of restrictions, but is the “gateway” to a tax credit designation that can aid in renovations.

He said there is concern about one of the two buildings in particular that “is showing more serious signs of fatigue,” requiring attention.

Still lacking is a clear direction for the block, which is divided between nine separate owners. Dutton has pushed for coordination, both in a development strategy, and a coordinated construction plan given the interconnected nature and structural condition of the buildings.

Going forward in isolation, he said, “is a potential recipe for failure.”

Fittingly, the banners lasted a week before last Wednesday’s windstorm pulled loose a section of the fabricated facade.